NO Oana
Back to: Concert Band

Tancredi is a melodramma eroico in two acts by composer Gioachino Rossini.
Duration: 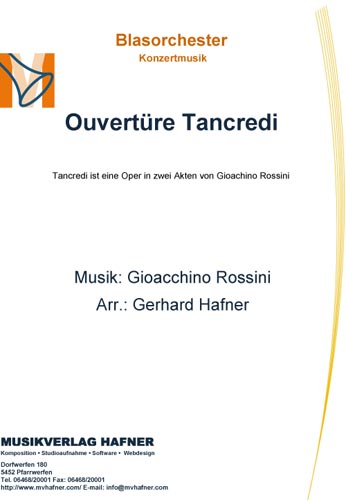 Salesprice with discount
Sales price 71,00 €
Ask a question about this product

Description Tancredi is a melodramma eroico in two acts by composer Gioachino Rossini and librettist Gaetano Rossi, based on Voltaire's play Tancrède (1759). The opera made its first appearance in Venice at the Teatro La Fenice on February 6, 1813, after Il signor Bruschino premiered in late January, giving the composer less than a month to have completed Tancredi. The overture, borrowed from La pietra del paragone, is a popular example of Rossini’s characteristic style, and is a regular part of the concert and recording repertoire.

Variations on a Song